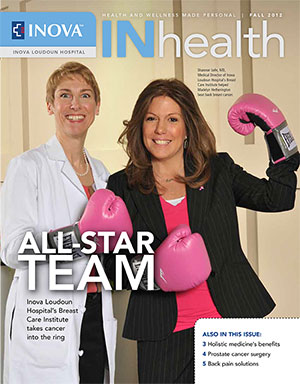 I decided to do a double mastectomy and I wanted the cancer out quickly. On May 16th 2012 I had my operation. The surgery went well; I was home the next day. After the pathology came back, unfortunately, I learned I had Stage III cancer. I had 10 lymph nodes removed and 6 were positive. It wasn’t the best news, but I forged forward ready to give the cancer the fight of my life.

A year later, I look back at the whole experience and smile. Why… because I did it. Through the chemo, hair loss, radiation and fatigue, I learned the definitions of Determination and Faith. I never dreamed I could accomplish what I’d done in the last year. I was overwhelmed by the love and support of family and friends. The secret to my success was having TWO support systems in place. One being at home with my family and the other being the team of doctors I have put together. A major part of my success was the trust I had in my medical team. I never had to worry about the next surgery because everything progressed exactly as they said it would. My doctors were the difference between “surviving” and” thriving.”

As a mom, wife, daughter, sister, full-time school teacher, realtor and friend…let me tell you, if you find yourself hearing those three words, “you have cancer,” just believe you have the strength to get through this. Rally your friends and family and get a great team of doctors to help carry you across the finish line.

Oh, and if you think you will never be the same after cancer—you’re right, you’ll be better than before. Here are some photos of me on the cover of Loudoun Hospital magazine (yes that is a wig—I was going through chemo at the time) and participating in my first Tough Mudder race in October 2013.