A mastectomy is a form of breast cancer treatment in which the breast tissue is removed. There are various techniques employed, and depending on the extent and location of the breast disease, lymph nodes may be removed as well. Often the nipple-areola is also removed; however, the extent of skin that remains, and even the preservation of the nipple-areola, will depend on the severity of the breast cancer itself and the recommendations of your breast surgeon and oncologist.

In the past, much of the breast skin was removed at the time of the mastectomy. However, when clinical studies demonstrated that there was no increased risk in cancer recurrence, surgeons began preserving the skin and removing just the nipple-areola with the breast tissue. Today, this advanced skin-sparing mastectomy approach is widely employed as part of breast cancer treatment due to its efficacy and superior outcome. In some cases, the procedure can be taken one step further to preserve the nipple-areola complex in addition to the breast skin. This is known as a nipple-sparing mastectomy, and it is often considered the ideal mastectomy option for qualified patients.

A lumpectomy (partial mastectomy) is focused on removing the specific area of disease within the breast as well as a certain amount of normal surrounding tissue. A mastectomy, on the other hand, involves removal of the entire breast gland itself. 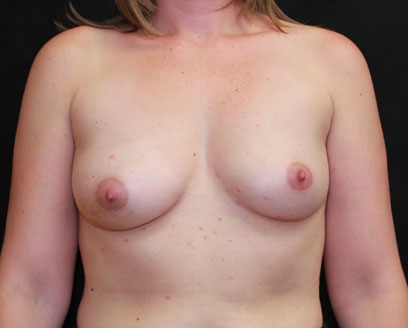 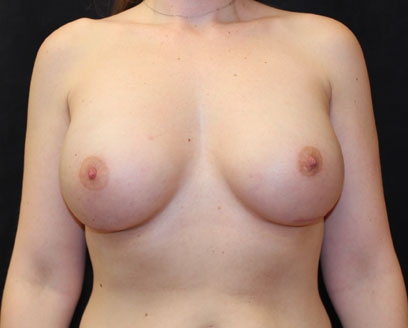 This is a 30 year-old, 5-5 and 150lb. young woman with a right breast mass and a strong family history of breast cancer. She had a bilateral nipple sparing mastectomy with tissue expander placement. Three months later the expanders were replaced with 650cc high profile silicone gel implants. She is seen 4 months after her surgery.
View More Photos in Our Gallery

Benefits of a Nipple- and Skin-Sparing Mastectomy

In general, the more skin that is preserved during mastectomy—particularly when the breast is not very large or has a low position—the more closely the reconstruction can be to a natural-appearing breast. Since both the skin- and nipple-sparing mastectomy techniques are designed to save as much skin as possible, exceptionally natural-looking breast reconstruction results can often be achieved via implant or tissue flap methods. The key, however, is to involve a board-certified plastic surgeon from the outset of breast cancer treatment. By doing so, the plastic surgeon can work together with your team of physicians to formulate and implement an individualized treatment plan that has the greatest probability of successfully removing cancerous tissues while yielding an optimal reconstructive outcome.

What Is a Risk-Reducing (Prophylactic or Preventative) Mastectomy?

A risk-reducing mastectomy—also referred to as a prophylactic or preventative mastectomy—is an elective procedure to remove one or both breasts to reduce the risk of developing breast cancer in the future. This may be chosen if an individual has a strong family history of breast cancer. The National Cancer Institute reports that prophylactic mastectomy in women with a BRCA1 or BRCA2 gene mutation can reduce their cancer risk by 95%. Although commonly known as a “preventative” mastectomy, this procedure is better described as a risk-reducing mastectomy, since it cannot completely prevent breast cancer from developing.

The decision to undergo a risk-reducing mastectomy is extremely personal and can have a large impact on one’s life. As with any surgery, this procedure comes with possible risks. Those considering a prophylactic mastectomy should talk with their doctor to learn about their options and make an informed decision about their health.

Am I a Candidate for a Nipple- and Skin-Sparing Mastectomy?

A nipple-sparing and skin-sparing mastectomy can improve the overall appearance of the breasts after reconstruction; however, these techniques are not appropriate for all women. In some cases, the tumor may be located too close to the nipple and areola, requiring this additional area to be removed to ensure all cancerous tissue is gone.

Those who may be eligible for a nipple-sparing and skin-sparing mastectomy include:

The nipple- and skin-sparing mastectomy is not ideal for certain patients due to the size and/or shape of their breasts. This includes women with large breasts, as they have more skin and the blood supply to the nipple may be compromised. Women who have an uneven nipple position or uneven breast tissue position may have limited reshaping and positioning of the breast and nipple.

The mastectomy procedure involves removal of the breast gland. Various factors can impact how the procedure is performed. The size of the breast and therefore the amount of skin can impact how the procedure is performed. This will involve location of incisions and management of the skin. Additionally, when possible, the nipple-areola may be preserved if there is a low risk of disease involvement of the nipple-areola or low risk of recurrence in the future. The planning and performance of the mastectomy procedure is also influenced and adjusted appropriately when your plastic surgeon is involved in performing a breast reconstruction at the time of mastectomy planning or even with a delayed reconstruction.

Recovery from a mastectomy primarily involves protection of the breast skin and limited activities. This involves avoidance of significant compression or temperature variation to the breast. Limited activities are also instituted during this time, although physical therapy and range of motion exercises are often employed after 1-2 weeks. It is also critical to avoid smoking and second-hand smoke. Pain management often involves narcotics and other analgesics; however, reducing the use of narcotics through local or regional anesthetics and pain pumps have been a significant advance and benefit to women recovering from mastectomy surgery.

Mastectomy scars depend on location and placement of incisions. A typical mastectomy that involves removal of the nipple-areola will often result in a scar across the central portion of the breast mound. On the other hand, if a nipple-sparing technique is used, a scar may be placed in the crease under the breast or on the side of the breast mound. In situations where the breast is of a larger size, a mastectomy will have to manage the excess skin, and this may result in an inverted-T type of scar. In all situations, scar management afterwards is beneficial through various topical silicone gel-based products.

Breast cancer recurrence after mastectomy is influenced by many factors, including the type and extent of the cancer as well as the treatment options employed. A frank and informative discussion with your breast surgeon and oncologist will help you to better understand those risks and how to best minimize them.

Why Involve a Plastic Surgeon if You Choose a Mastectomy

A plastic surgeon is an important and integral part of your breast care team. We believe it is in the best interest of every woman diagnosed with breast cancer to consult with a plastic surgeon, so that they can better understand the potential reconstructive options involved in whatever treatment plan they may choose—whether that may be a lumpectomy or mastectomy. Additionally, with many women choosing to begin their breast reconstruction at the same time as their lumpectomy or mastectomy, they are being proactive with their health care and also optimizing the opportunity for treating their breast cancer effectively, while also optimizing the opportunity for a satisfying cosmetic appearance.

When a board-certified plastic surgeon is involved from the start of breast cancer treatment planning, breast reconstruction surgery can often be performed at the same time as a skin- or nipple-sparing mastectomy, should this be the recommended and/or desired course of action. During this combined procedure, abnormal breast tissue will first be removed while preserving as much skin (and potentially the nipple-areola, depending on the technique) as possible.

Once tissue removal is complete, the breast envelope is filled with either an implant or tissue flap. For implant reconstruction, patients have the option of saline, traditional silicone, or anatomically shaped cohesive gel implants to restore the breast mound. For flap reconstruction, tissues are taken from the patient’s abdomen, back, and/or buttocks and transferred to the chest to recreate the breast mound. Both techniques are able to produce a very natural breast appearance when performed by a skilled and experienced plastic surgeon. In fact, many breast cancer patients opt to receive a bilateral mastectomy and can achieve a highly symmetrical reconstructive outcome.